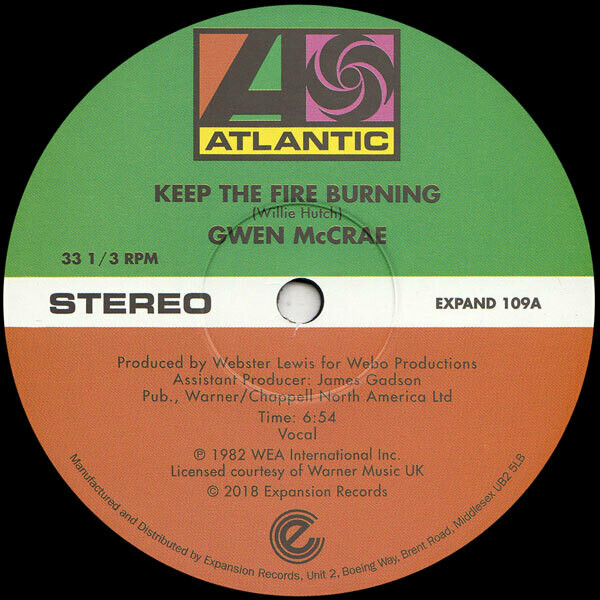 Keep the Fire Burning and Funky Sensation by Gwen McCrae, two tracks synonymous with the soul, boogie, rare groove and modern disco scenes, are finally being reissued on Expansion Records after a long-anticipated wait. Keep the Fire Burning, originally released in 1981, is a remake of the Willie Hutch original. This reissue of the U.S 12" pressing at its full length - 6:54 - is sure to galvanise any dance floor and lift spirits immeasurably. After achieving relative notoriety within the underground scene, notably after being played by Danilo Plessow - a.k.a Motor City Drum Ensemble - during his London Boiler Room in 2015, Keep the Fire Burning has since been one of the most sought after records of the past decade, seamlessly bridging the gap between rare-groove and underground dance-music. Whats more, recent price-hikes on online vinyl-distribution websites denote the way in which the market for this record has grown exponentially, a testament to its new-found popularity among the worldwide dance-music diaspora. Funky Sensation, moreover, possesses a timeless and universal groove, a song which has cemented itself as a darling of the boogie-scene, while gaining traction from the likes of Dam Funk and Nu Guinea. Furthermore, Funky Sensation is a traditionally popular record amongst the UK Soul scene, after seeing airtime on London Pirate-Radio stations during the 1980's.

A1. Keep The Fire Burning